Spacebar clicker, which also goes by the name of ‘spacebar counter’ is a fun online tool that is available for free. It is a tool that records the number of times you press the spacebar key on your keyboard, in the given time!!

✅ You have hit the spacebar 0 times.
Your spacebar speed is: hits/second. 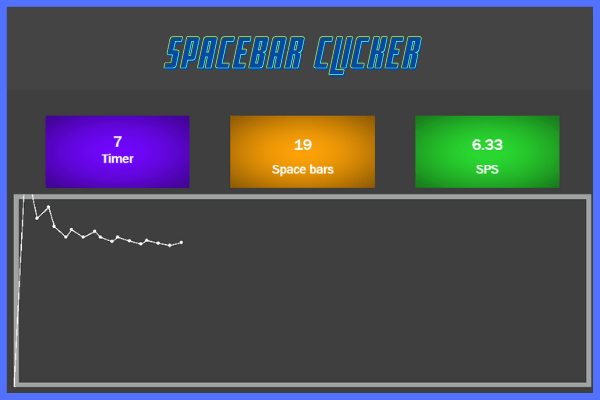 Apart from telling you the total number of presses you did with the spacebar key, it also provides you knowledge of your total speed (in hits/second or clicks/second). There are also different time limits from 5. 10 seconds up to 1 minute (60 seconds) in which you can try to tap the spacebar the maximum number of times.

Space Bar is really amazing big button of the keyboard which we use daily.

Whom is this tool for?

Spacebar clickers can be used by anyone, from teenagers trying to have fun to actual competitive gamers. Many people use ‘Spacebar clicker’ for fun and games either solo or with their friends.

It is sometimes also used by gamers to increase their spacebar cps (clicks per second) which will then help them in various competitive games such as Doom, Fortnite, etc.

Why is this tool used?

As we mentioned earlier, spacebar clickers can be played for fun as well as to get better at your ‘spacebar tapping’ abilities. If you have a few friends over and you guys want to compete in a small game, it will create a fun and competitive environment among you and your friends and you can try and beat them.

Another case of using the spacebar clicker is if you want to get good at competitive games. E.g: Fortnite, a competitive online game, lets you ‘build’ in-game, a better spacebar cps speed will enable you to get the upper hand on your opponents by building faster.

Spacebar clicker is a friendly tool because it lets you choose from different time frames when you want to take part in the competition. For example, you can either choose from 5 seconds, 10 seconds, 20 seconds, 30 seconds, or 60 seconds.

The first time limit you can use is the 5 seconds limit. This is usually best if you are a beginner and just want to get a few practice rounds in before you try longer time limits.

The third option is the 20 seconds spacebar clicker, which provides more time for you to get more clicks in and up your score!

Thirty seconds of spacebar clicking to get a good high score and a higher spacebar cps speed.

Finally, the longest time you can have to yourself is 60 seconds. Be warned though as in this time limit, most users get tired out and lose accuracy which ends up getting them a poor cps. This time frame is mostly used by competitive gamers.

The most commonly used method which is also well-known is clicking the spacebar with your index finger. Visit any website with the spacebar clicker tool. First of all, choose the desired time frame you wish to compete in.

There will be a popup saying something like: “Press the spacebar to start.” That means the countdown will begin as soon as you start clicking the spacebar. Try and get a good score out of the time frame by clicking as fast as you can.

Another method that you can try is dragging the spacebar to get a good score. However, this method only works on gaming keyboards, the ones which let you change the number of clicks of your spacebar.

After changing the number of total clicks, press and hold and then drag the spacebar to register collective clicks each time.

Q: What is the average spacebar cps?

A: The average cps for spacebar clickers (overall for all time frames) is 6.27.

Q: How to get a good spacebar cps?

A: The key to get a good and above-average spacebar cps is to press the spacebar with consistency and dedication. Avoid pressing with inconsistency as it can lower the cps.

Q: Can I use this tool to compete with my friends?

A: Yes, the spacebar clicker is a fun and exciting online tool that you can use to compete with your friends. You can also use different time frames.

To summarize, the spacebar clicker is an amusing and friendly online tool that you can use to have fun or improve your clicking speed. You can also use different time frames such as 5,10,20,30 or 60 seconds. Try scoring the highest you can to show off to your friends or overall in the spacebar clicking community!